Consumer Credit by the numbers – is it getting better?

South African consumers are buckling down and their management of household debt has shown improvement.Starting with collection of outstanding debt, where a clear improvement in consumer behavior is evident. The total number of civil judgments recorded for debt decreased by 16% in the first quarter of 2017 compared with the first quarter of 2016, according to Stats SA data released on 18th May 2017. The total value of judgments dropped 12%. And, the number of summonses issued for civil debt increased by a mere 2% during the same period.

Encouragingly, the trend shows that since 2013, the total number of civil judgments for debt have steadily decreased from above 30 thousand per month, to below 20 thousand per month. Summonses issued to obtain judgment for the collection of debt have also been sliding from slightly above 60 thousand to just more than 50 thousand, since 2013.

The latest Transunion consumer credit index appears to support the assertion that household debt reduction is a reality. As a credit bureau, Transunion receives real time data from creditors and other financial services providers on consumer payment patterns. This data is used to compile the index. It measures aggregate consumer loan repayment records, the use of revolving consumer credit facilities as an indicator of distressed borrowing, estimated household cash flow as a means of determining financial pressure/relief, and the relative cost of servicing outstanding debt. These aspects are then combined into a single indicator of credit health.

If the indicator is above 50, the consumer data is positive. Below 50 it is negative. The latest Transunion Consumer Credit Index indicates that the number of accounts in arrears by three months or more, have decreased at the fastest pace since 2015. The first three months of 2017, 5.7% fewer accounts were in default by this measure than in the same period last year.

Meanwhile, the use of revolving credit facilities as an indicator of distressed borrowing, increased by just 1%. And limits on these facilities showed an even slighter rise, according to the report. There is limited new borrowing and lending in the unsecured credit market, yet at the same time, Household cash flow was down 1% in the same comparative period.

The authors of the index report state “Given challenging economic and labour market conditions over the past year, better loan repayment behaviour may be driven by tighter lending standards among major credit providers, more cautious borrowing, and deleveraging.” To deleverage is to reduce total debt outstanding in one’s estate.

Evidence of this deliberate effort by households to bring down debt comes from SA Reserve Bank data, released earlier in May. It indicates that from January to end of April, households spent roughly 73% of their disposable income to service debt. Last year over the same period it was over 75%. In 2008 it was 88%.

The effect can be seen in inflation figures. According to official statistics released mid-May, there has been a slower increase in consumer prices in April. Consumer inflation rose by 5.3% in April, compared to 6.1% in March. The inflation rate had been above 6% since January 2016. It dipped very briefly below 6% in the second part of the year, but also only for one month.

Number of Insolvencies as taken directly from Stats SA 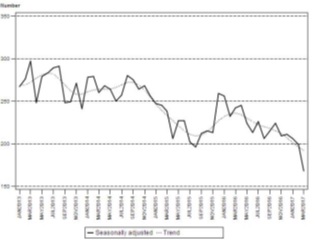 The trend of fewer bankruptcies is also evident in the corporate space.

Number of Liquidations as taken directly from Stats SA 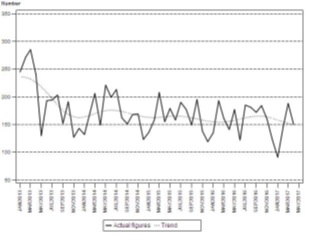